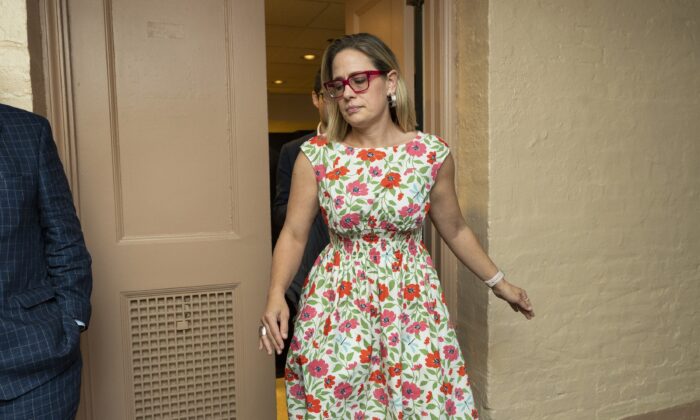 A group of progressive activists followed Sen. Kyrsten Sinema (D-Ariz.) into a bathroom at Arizona State University on Friday to confront her over her opposition to the $3.5 trillion Build Back Better Act and demand she take action.

The incident came just days after Sinema on Sept. 30 doubled down on her position not to support the Democratic leadership’s proposed $3.5 trillion spending bill, which includes mass amnesty for illegal aliens, as well as funding for social programs like Medicare and the Child Tax Credit, which Sinema wants Democrats to spend less on.

While the economic agenda has been largely supported by Sinema’s Democratic colleagues, Sinema has joined Sen. Joe Manchin (D-W.Va.) in indicating that they would not back the bill without adjustments. Both votes are critical to the bill’s passage, and they have long maintained that the price tag is too high.

The activists allegedly confronted the Democrat outside the classroom where she teaches on Friday and followed her to the nearby bathroom while filming the encounter, which was then shared on Twitter.

Sinema initially told the group she was “heading out” and couldn’t speak at the time but they continued to follow her into the restroom and confronted her.

One member of the group threatened to get Sinema removed from office if she didn’t support the Build Back Better Act “right now.”

“We knocked on doors for you, to get you elected. And just how we got you elected, we can get you out of office if you don’t support what you promised us,” the activist shouted.

“My name is Blanca, I was brought here to the United States when I was three years old and in 2010, my grandparents both got deported because of SB 1070 and I’m here because I absolutely believe we need a path to citizenship,” the same activist continued.

“My grandfather passed away two weeks ago and I couldn’t go to Mexico to visit him because there is no way to citizenship. And if we now have the chance to pass it on, then we need  do it, because there are millions of undocumented migrants, like me, who share the same story or even worse things that happened to them because of SB 1070 and because of anti-immigrant legislation.”

“This is an opportunity to pass it right now and we need to hold you accountable to what you told us, what you promised us you were going to pass when we knocked on doors for you, it’s not right.”

House Speaker Nancy Pelosi (D-Calif.) talks with reporters as she leaves a lengthy Democratic caucus meeting in the U.S. Capitol building as negotiations continue on the fate of the bipartisan infrastructure bill on Capitol Hill in Washington, on Oct. 1, 2021. (Leah Millis/Reuters)

A second activist also told Sinema that they were a survivor of human trafficking, noting that this was due to the “lack of protection at work that we do not have,” while urging the Democrat to “assist the workers.”

The video then ends. Sinema did not appear to respond to the activists throughout the encounter.

Footage of the incident prompted a response from Rep. Matt Gaetz (R-Fla.) who shared the video on Twitter alongside the caption, “#DeportBlanca.”

Former Trump administration adviser Stephen Miller also shared the video on Twitter, writing: “An illegal alien is stalking a US Senator to demand passage of Biden’s reconciliation bill b/c it includes mass amnesty for illegals. In a functioning democracy, ICE would swiftly deport this person, but under Biden’s new edict (as the lawbreaker knows) she’s immune from removal.”

Conservative journalist Jack Posobiec said the “attack” on Sinema was a “textbook example of stochastic targeting.”

“Media and Dems spent the week demonizing her, then radicalized leftists stalked her down.” He later shared a second video that claimed to show the same group of activists protesting outside Sinema’s home later that evening.

The video shows members of the group chanting “build back better, back to build.” It is unclear if the footage was taken outside of Sinema’s home or at an event.

On Saturday, Sinema condemned her own party for its “inexcusable” failure to hold a vote on the bipartisan infrastructure plan after House Speaker Nancy Pelosi (D-Calif.) cancelled the vote, stating that “more time is needed.”

The Congressional Progressive Caucus, a bloc of nearly 100 House members, doesn’t want to pass infrastructure without the lower chamber first passing the mammoth budget piece, but moderates say the proposals should be considered separately and have urged a vote on the infrastructure bill.

“The failure of the U.S. House to hold a vote on the Infrastructure Investment and Jobs Act is inexcusable, and deeply disappointing for communities across our country,” Sinema wrote in a statement on Twitter.

“My vote belongs to Arizona, and I do not trade my vote for political favors—I vote based only on what is best for my state and the country,” she continued. “I have never, and would never, agree to any bargain that would hold one piece of legislation hostage to another.”

Sinema also noted that her desire to see the House approve the bill has driven “good-faith negotiations” on the reconciliation package even as she and Manchin have opposed the giant price tag.