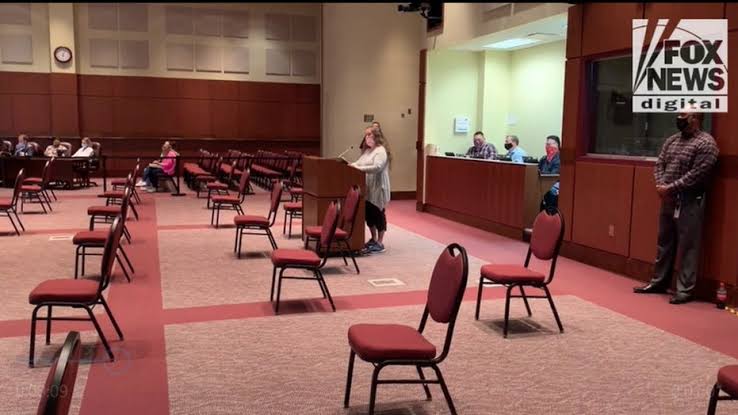 ‘This is not China, this is the United States of America, and we will not be silenced,” one irate mother said.

Loudoun County parents and a student demand that Superintendent Scott Ziegler tender his resignation in the wake of allegations that a male student sexually assaulted two female students months apart, one of them in a girls’ restroom.

ASHBURN, Va. – More than 60 concerned parents, students and residents spoke at the Loudoun County School Board meeting Tuesday evening, with many demanding the resignation of Loudoun County Superintendent Scott Ziegler in the wake of allegations that the school district covered up two alleged sexual assaults.

Parents attended the school board meeting with signs urging Ziegler to resign.

“This is not China, this is the United States of America, and we will not be silenced,” one irate mother said. “Remove the superintendent immediately and then resign for your negligence and duplicity. End this nightmare!”

“We can confirm a May 28, 2021 case that involved a thorough 2-month-long investigation that was conducted to determine the facts of the case prior to arrest,” the sheriff’s office told Fox News. “This case is still pending court proceedings. The Loudoun County Sheriff’s Office is not able to provide any documents that pertain to a pending case.” The sheriff’s office confirmed that the case involved sexual assault.

At a June 22 board meeting, Ziegler declared that “the predator transgender student or person simply does not exist,” and that to his knowledge, “We don’t have any record of assaults occurring in our restrooms.”

On Aug. 11, the school board voted to approve a controversial transgender policy, 8040, which requires teachers to call students by their preferred pronouns and requires bathroom renovations to make them more private.

On Oct. 6, at another school, a 15-year-old boy was charged with sexual b attery and abduction of a fellow student, the sheriff’s office reported

Advertisement
. The boy allegedly forced a female victim into her empty classroom where he held her against her will and inappropriately touched her. Reports connect the two assaults, although police have not confirmed to Fox News that they involve the same male student.

“These incidents were reported immediately to the Loudoun County Sheriff’s Office, and LCPS cooperated fully with the investigations,” a spokesperson for Ziegler told Fox News. “Any information related to student information is confidential under state and federal laws regarding student privacy.”

The spokesperson declined to comment about parents’ allegations that Ziegler engaged in firing offenses. The superintendent’s office gave no response to demands that Ziegler resign.

“The 8040 policy was rushed through to a vote without consideration for the safety of all students, simply to satisfy a liberal agenda – a policy that you knew full well would allow our children to be abused inside our schools,” an irate mother said at the school board meeting Tuesday. “At least two young women are recent victims of sexual assaults in our high schools, one of them in a restroom.

“Your moral compasses are busted! You, Dr. Ziegler, and our school board – every one of you – are complicit in these crimes against our children because you did nothing about it, nothing.”

“What is worse than a child being raped at school? The coverup by those who are trusted with the safety and well-being of children,” another mother said. “Today, Scott Ziegler must resign for the unconscionable act of allowing an alleged rapist back into school to rape again, and for that coverup.”

“We warned you about policies that you were putting into place that would be a danger to our students, and we’ve seen that happen,” a father said. “When is enough enough? When are you going to change the policies to keep our children safe?”

Katie Young, a 14-year-old student in the school district, claimed that “8040 and many policies that are being proposed are not to make people more comfortable or to accept others but instead to change the way my peers and I think, so that we will become the next generation of social justice warriors.”

“I am 14 years old, the fact that I have to be here defending my rights to not have your radical agenda shoved down my throat in school is not only concerning, it’s upsetting,” Young added. “My peers and I are not tools to further your political agenda.”

“These school board members knew about the first incident at the June 22 meeting. I’m sorry, they all knew about the case when they were here for the June 22 meeting. And now another child has been hurt by this same predator? And so we hold them accountable,” Patti Menders, a mother and president of the Loudoun County Republican Women’s Club, told Fox News in an interview before the meeting.

Each speaker entered the room alone, had one minute to speak, and then security ushered them out. The large room was almost entirely empty except for the school board at the front, a few scattered members of the media on the left, and staff on the right. Speakers addressed the largely empty room in an area with chairs spaced far away from one another. One mother suggested that the school board was breaking the law, holding a “public meeting” largely in private.

Neither the school board chair, Brenda Sheridan, nor member Beth Barts, whom many parents singled out in comments, responded to Fox News’ requests for comment regarding demands for their resignations.