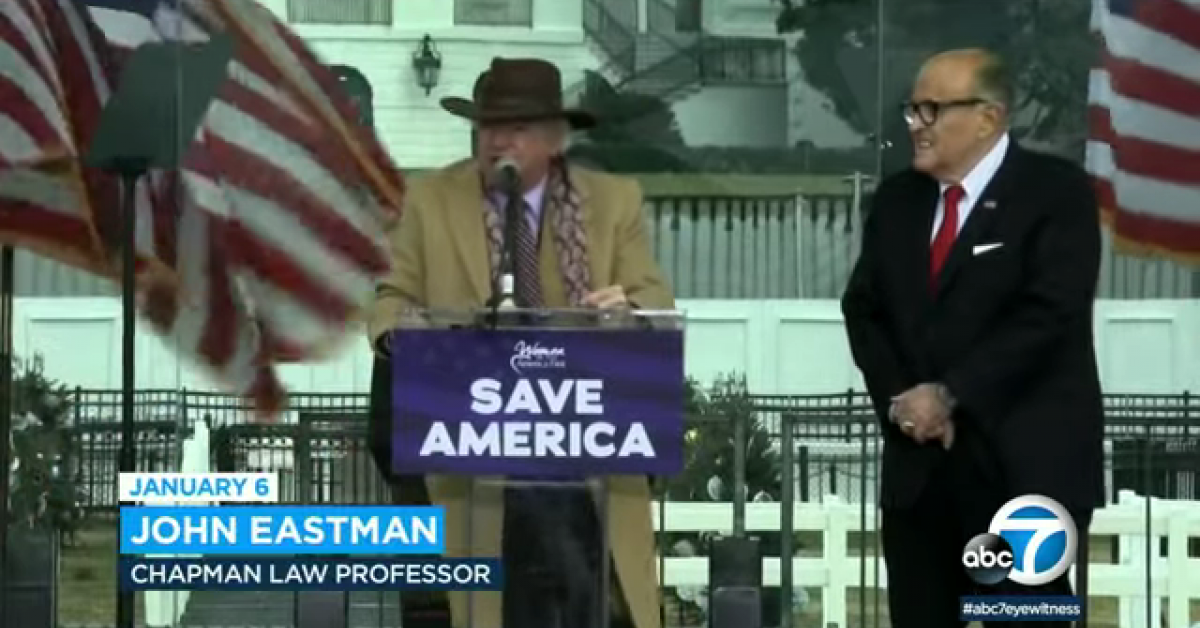 The nation’s largest gathering of social scientists deplatformed a conservative group because a lawyer for former President Donald Trump was participating in its events.

The American Political Science Association forced the Claremont Institute to make its “related group” discussions virtual at the annual convention in Seattle, a day after hundreds of APSA members demanded the association eject both Claremont and John Eastman.

Back in July, organizers had only demanded the two panels with Eastman be made virtual in the interest of “safety,” Claremont president Ryan Williams wrote in an opinion essay. The group decided to cancel all 10 panels and its reception in protest of APSA’s new across-the-board demand.

Eastman has previously suffered professional consequences for his connection with Trump and his election lawsuits.

Chapman University forced him to retire as a law professor after he spoke about election fraud at Trump’s “Save America” rally Jan. 6 preceding the Capitol riot. The University of Colorado Boulder dumped him as a visiting professor in conservative thought and policy a month later.

A former APSA member who was Eastman’s roommate in graduate school called the association “cowardly weasels” for deplatforming Claremont rather than providing security at its events.

The discussions APSA itself hosted were “dreadfully boring or stupid,” political scientist John West, formerly of Seattle Pacific University, said in a phone interview. The related-group discussions such as Claremont’s were the best reason to attend.

The protests against Eastman reached a fever pitch last month after reporters obtained his memo proposing a scenario under which Vice President Mike Pence would declare that seven states have no “validly appointed” electors due to ongoing disputes.

The tally excluding them would reelect Trump, Eastman wrote. Williams said this was a “truncated part of a draft version of John’s memo” sought by Trump and Pence “on how to proceed during the course of a constitutionally valid process.”

The demand letter to APSA came days later, calling Eastman “an active participant in the attempted coup” whose proposal would have brought democracy “to an abrupt conclusion.” The signatories also called Claremont “an active proponent [of] falsehoods and misinformation about the 2020 election and its aftermath.”

Claremont has hosted events at the APSA for 35 years, according to Williams. Not only does the publisher of the Claremont Review of Books consistently offer the most panels of any related group, but its panels are “often the best-attended” at the convention and a major driver of revenue for APSA, he wrote in Newsweek.

“They have really a storied history of putting on fabulous receptions and panels” that go beyond “navel-gazing,” said West, who worked for the institute in graduate school. “They don’t just bring people who have the carbon copy view, especially in the wider conservative community,” and its panels are no more “screwy” than others allowed by APSA.

Those brow-raising panels include “When Disobedience Should Be Uncivil” and “Cities as Sites of Resistance,” according to Williams’ essay. APSA itself has given tens of thousands of dollars to the Democracy Fund, “which primarily bankrolls left-of-center media outlets” and whose leaders signed the letter against Eastman and Claremont, he wrote.

While Drezner criticized Claremont for inviting Eastman to speak, the columnist said APSA’s unilateral decision to make the panels virtual “feels very much like assenting to a heckler’s veto. That does not strengthen democracy either.”