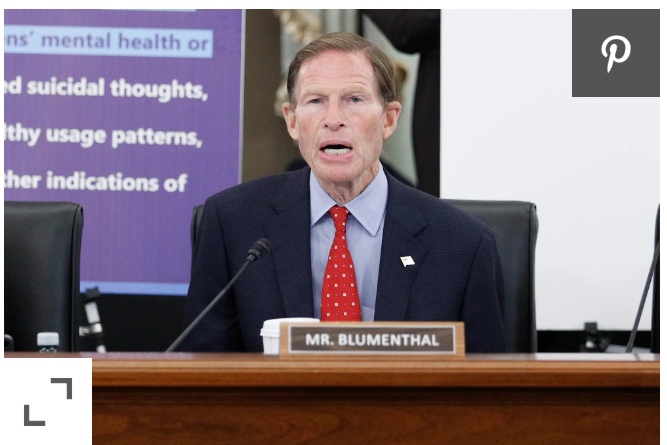 Sen. Richard Blumenthal discussed his office’s research during a hearing about the effects social media can have on young people’s mental health and well-being

A quick glance at Sen. Richard Blumenthal’s verified Instagram account shows he knows how to take a selfie. But to find out what it’s like for a 13-year-old girl to use the social media app, he and his staff created a fake account and posed as one.

Blumenthal’s office conducted the research ahead of a hearing Thursday in order to examine the “toxic effects of Facebook and Instagram” on young people.

With the fake account, Blumenthal’s team “followed a few easily findable accounts associated with extreme dieting and eating disorders,” he said at the hearing. “Within a day its recommendations were exclusively filled with accounts that promotes self-injury and eating disorders. That is the perfect storm that Instagram has fostered and created.”

Facebook’s Global Head of Safety Antigone Davis was on hand, via video, to answer questions by the Senate’s consumer protection subcommittee. She defended the company, which owns Instagram, saying, “We’ve been working with suicide prevention experts since 2006. We also work with eating disorder experts. We don’t allow the promotion of either kinds of content on our platform.”

Blumenthal cited recent reporting in The Wall Street Journal as well as information provided by a whistleblower to his office about Facebook’s attempts to market to young users despite research that shows it can be harmful to their emotional and mental health.

“Instagram’s recommendations will still latch on to a person’s insecurities, a young woman’s vulnerabilities about their bodies, and drag them into dark places that glorify eating disorders and self-harm,” he said.

The Journal said it obtained research from Facebook that indicated “teens blame Instagram for increases in the rate of anxiety and depression” and “thirty-two percent of teen girls said that when they felt bad about their bodies, Instagram made them feel worse.”

“As long as there’s one person dealing with the issue on our platform, we consider it a problem,” she replied.

She also explained ideas the company is considering to mitigate it. “We’re looking at nudges towards uplifting content,” she said. “We’re also looking at something called ‘take a break,’ where we would encourage somebody to take a break when we think they may be rabbit holing down certain kind of content or on the app too long.”

The questioning that got the most attention, however, was when Blumenthal asked Davis, “Will you commit to ending Finsta?”

Sen. Blumenthal asks Facebook “Will you commit to ending Finsta?”

Facebook’s safety chief has to explain that Finsta is slang for a fake account. pic.twitter.com/jMYy5AIZjY — Eric Morrow (@morroweric)

Davis took a pause before answering.

“Senator, again let me explain, we don’t actually do Finsta,” she said in a moment that went viral (video of the exchange has millions of views online). “What Finsta refers to is young people setting up accounts where they may want to have more privacy.”

More broadly, “Finsta” is a term for a fake Instagram account that some users set up in secret to control who sees the content they’re posting there.

“Finsta is one of your products or services,” the senator continued. “We’re not talking about Google or Apple, it’s Facebook, correct?”

“Finsta is slang for a type of account,” Davis said, “it’s not a product.”

As the hearing ended, Blumenthal made it clear that he would like Facebook to end those types of accounts.