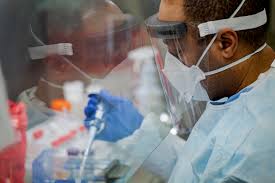 Iowa Republican Rep. Mariannette Miller-Meeks’ amendment was rejected by 217 Democrats voting against it.

House Democrats blocked an effort to require COVID-19 testing and vaccinations for migrants stopped at the border before they are released into U.S. communities.

The move comes as President Biden requires federal employees, including members of the U.S. military and Border Patrol, to receive the COVID vaccine. The U.S. government will reportedly fund COVID testing for federal workers who are not yet vaccinated.

The amendment to require the testing of migrants was introduced by Iowa Republican Rep. Mariannette Miller-Meeks as part of the continuing resolution that Congress was debating to keep the government funded through early December. The legislation ultimately passed the House without the amendment after House Democrats rejected it.

“My commonsense legislation would require the Department of Homeland Security to test all migrants illegally crossing our border who they plan to release into our communities, and they should be tested for COVID-19,” Miller-Meeks said.

Today, I offered my REACT Act on the House floor, which would require DHS to give a COVID test to everyone crossing our border illegally.The majority chose to block this commonsense bill that would ensure the health and safety of border patrol and border communities.

Homeland Security Secretary Alejandro Mayorkas said recently that the 15,000 Haitian migrants who arrived at at the border in Del Rio, Texas were not tested by DHS for COVID-19.

The Biden Administration has been processing and releasing thousands of migrants who arrive at the U.S.-Mexico border. Rather than provide all of the released migrants with a court date to appear for their asylum claim, many are reportedly being asked to voluntarily report to Immigration and Customs Enforcement (ICE). Republicans in Congress have argued that such as system is unsustainable and serves as a magnet for more illegal immigration into the U.S.

“Think about what they’re asking them to do,” New York Republican Rep. John Katko, ranking member of the House Homeland Security Committee, said during an interview with Just the News. “Don’t call us until this date and on this date, after you’ve settled into our country — where you have much more than you had in your own country you came from — then at that point call us so we can start deportation proceedings against you. I mean, come on, man, you know, they’re not going to do that.”

Miller-Meeks’ amendment was rejected by 217 Democrats voting against it.

“The majority chose to block this commonsense bill that would ensure the health and safety of border patrol and border communities,” Miller-Meeks wrote on Twitter.

A similar amendment from Miller-Meeks was blocked in March. According to House GOP Leader Kevin McCarthy’s office, 970,000 migrants have crossed the border since her original amendment was defeated.